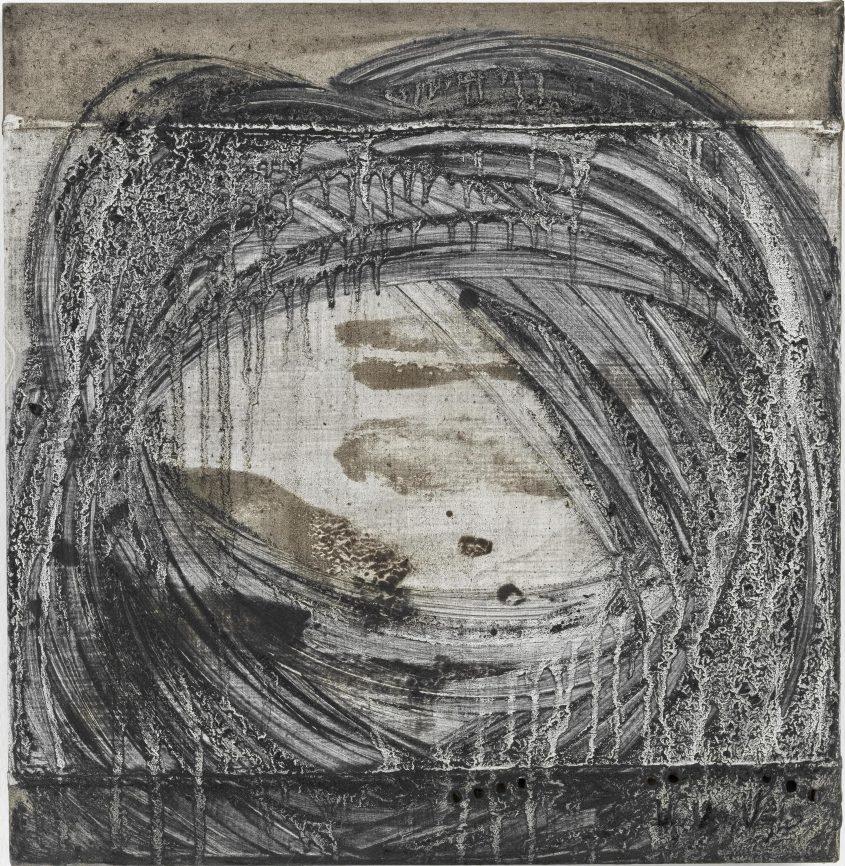 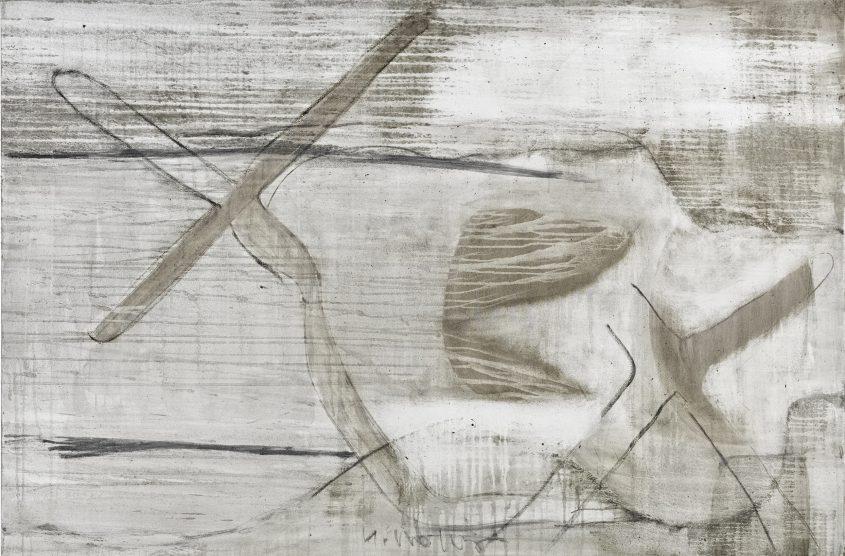 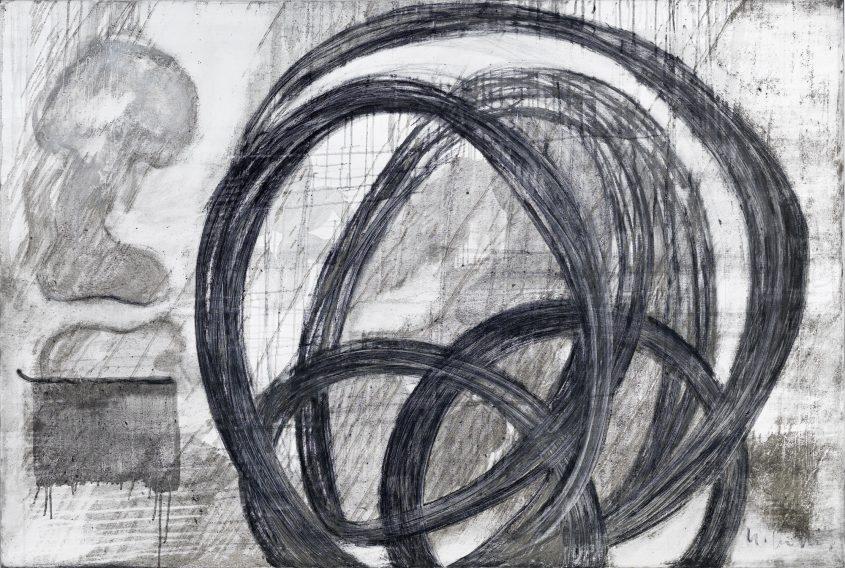 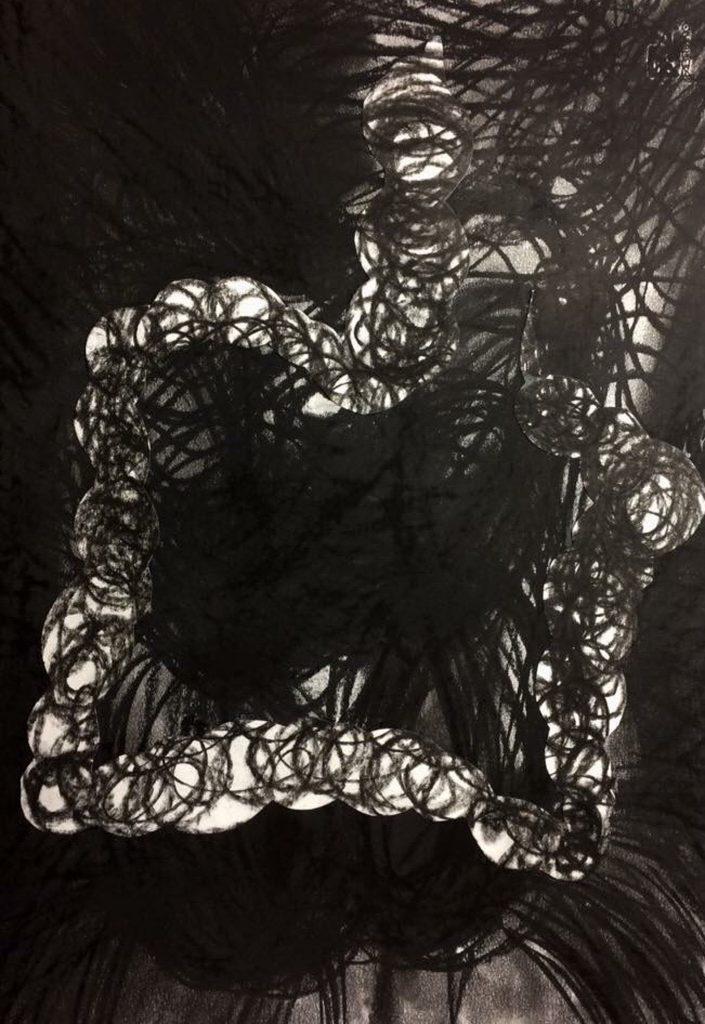 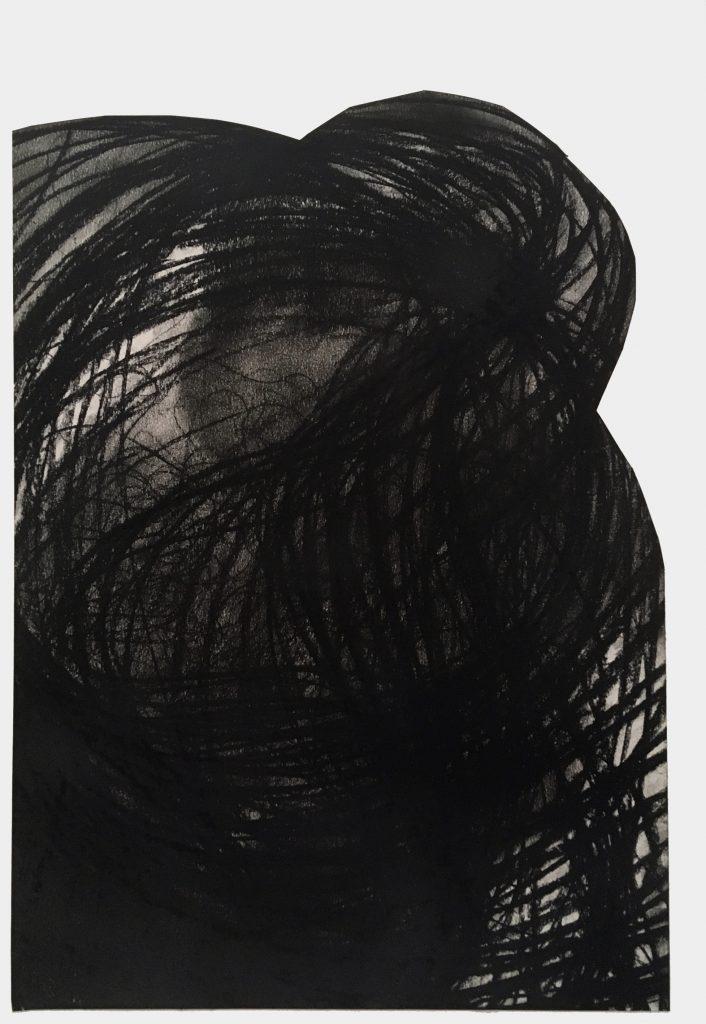 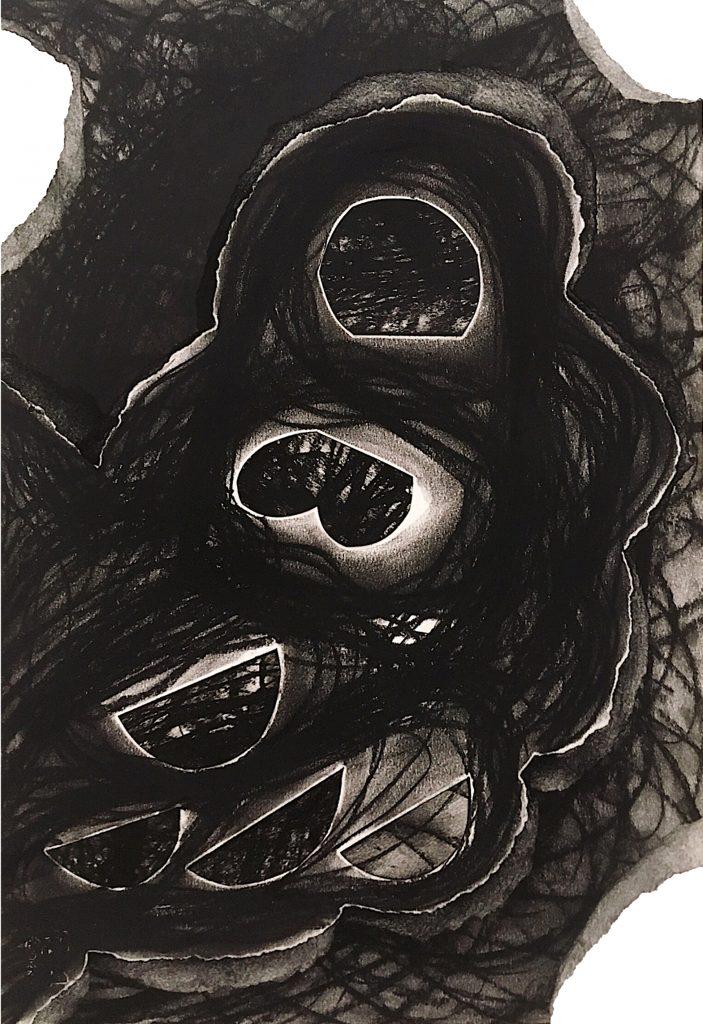 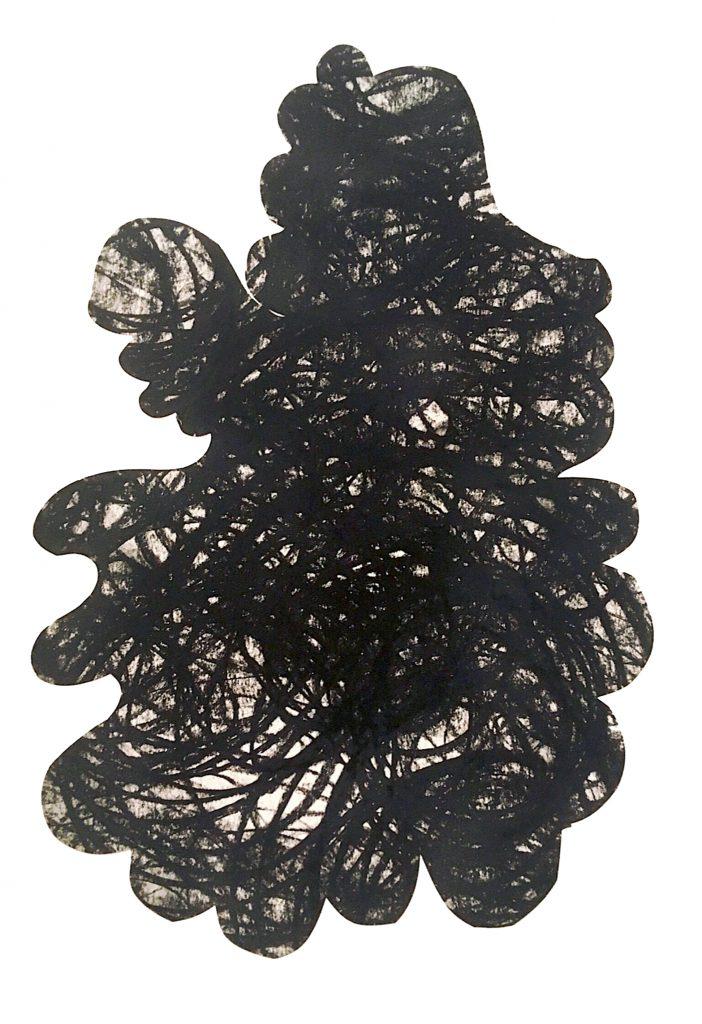 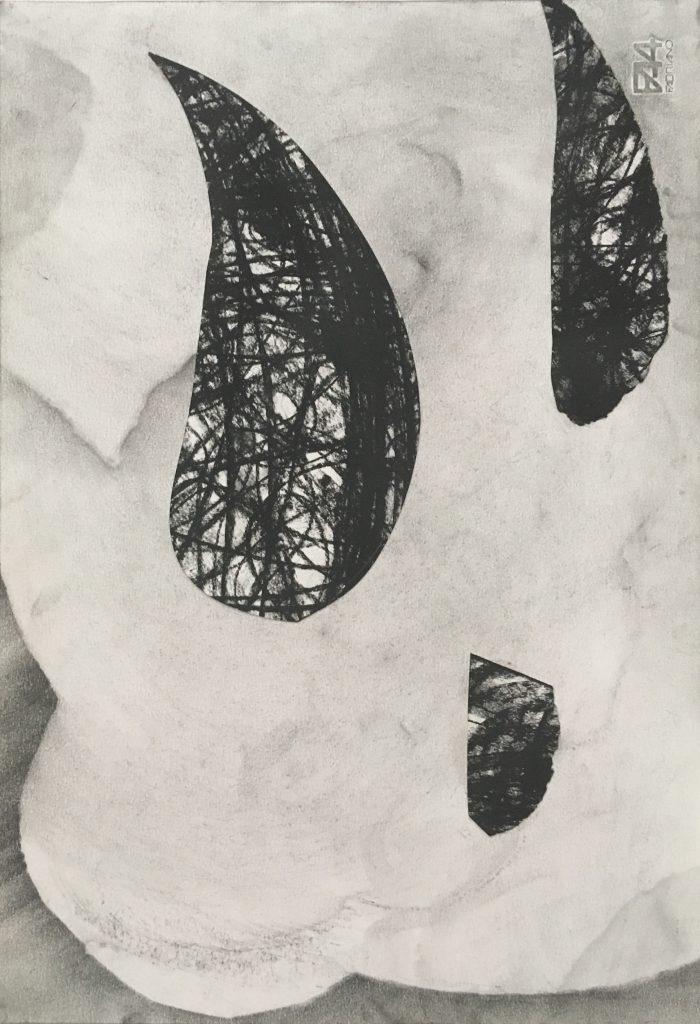 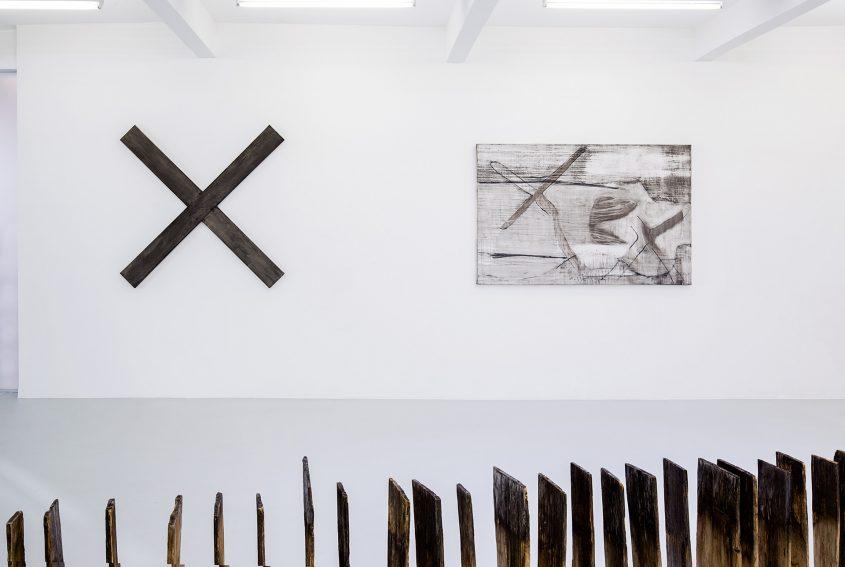 As an artefact, a piece of art is not just an agglomeration of qualities, but also a bearer of interrelations: There is both an outer appearance and a hidden dimension, an external and internal area, an interplay of visible and invisible elements, of material structure and narrative. The artwork is a code of itself, as it were.

The question now is where to find the narrative moment in the pictorial as well as graphic series “Acceleration”. The answer is to be found within the artist herself. Everyone who gets to know Heidi Holleis or her art, be it only on a superficial level, will immediately discover a connection between her works of art and her personal interest in philosophy (as well as cultural theory and literature). As the art historian Markus Neuwirth has correctly stated in his text “Holleis – Ikonologie der Asche”, the series “Acceleration” can be read as “abstract empathies […], where the brush and thereby also the forms steadily gain speed […]” [1]. But in this particular case the technique, or artistic practice, is based on a theorem. In this context, avoiding the term “theory” is intended because by using “theorem” conception and investigation are also taken into account and not just the factors tenet or rather theory development. On the basis of discussions with friends who are well-versed in philosophy but also by reading and self-study, Heidi Holleis absorbs knowledge and then transforms it through an artistic act.

Not just the gestures but also the materials of ashes and coal play an important role in this context and at the same time constitute another reference to the philosophy of “accelerationism”. An important aspect of this philosophical movement is that capitalism must or can be overcome by the same means through which it operates. This means that renewal will only be accomplished, if the given is (accelerated) exhausted. Do the materials used in Heidi Holleis’ art not work in a similar way? Ashes and coal are preceded by a decomposition process as well as energy input: wood must be burned in order to create coal and ashes.

As a recent political theory, accelerationism places an emphasis on the issue of overcoming the capitalist order. To put it more succinctly, accelerationists have a rather distorted relationship with capitalism. Even though capitalism is considered as the social system that has to be overcome, it is not seen as the epitome of all evil. Therefore, the motto is not “Smash Capitalism” and that’s that, but rather “Smash Capitalism through Capitalism” or – in the words of accelerationism –, let us make use of the latest capitalist developments and technical achievements in order to destroy the system more quickly.

The words used in this text have been put into a framework and are to be applied as an additive to the artworks of “Acceleration”. Therefore, they should be read in the sense of an effusion of the mind. Without thinking twice about whether the written words make sense or not, the author types with his eyes roaming rather uncertainly over the advancing texture, while the movements of the fingers are creating the beat.

Taking up the speed!
accelerare, accelerate, hasten, carry, promote, rush over, hurry
Treating idleness as apostasy and volatility
No pause – never!
Putting the thought into the digital image
Turning technology into tactics
Accelerating not the brush but words and, ultimately, the text flow
All the way to complete EXHAUSTION.